Family Island is one of the best farming games in 2022 and my new favorite! I used to be a Hay Day addict, but that was a long time ago. I thought that the charm of a good farming simulation had evaporated for me but Family Island proved me wrong. I’ve been playing it for more than two months now and I have several things to share with you in terms of gameplay. Join me!

Family Island is a free mobile game where you can make in-game purchases in exchange for energy and diamonds. It’s a great pass-time and it can really be your next favorite mobile game if you give it a chance. If you’re already a Family Island player - this article is for you. Have a look at some of the gameplay issues people came across and enhance your farming experience. (Btw, follow Family Island on Instagram - awesome content!)

At some point in the beginning of the game there comes a time when you start waiting for level 19 when you get to repair the stairs and to unlock a new part of the island. When I reached level 19 however, a loop seemed to occur. It turned out that I was not the only one who had that issue - I found people talking about it on forums but nobody offered a solution.

So I contacted the Family Island support. And guess what, after a few Facebook messages I had already sent them a screenshot of my island and they told me what I can do to move on.

What I had done wrong is that I ignored the conversations with the NPCs (the family members) for some time because I found that to be the only part of the game that was actually boring to me. (Yes, I know that if you play the game right there would be no loop!) However, when they say their lines they actually give you a task. For example, they say “build this” and suddenly you get directed to the store and you can get the machine.

So, the solution to the level 19 loop is:

Talk to Bruce, the father. He’ll tell you to “repair the stairs” and there you go, problem solved. No more loop. Family Island is definitely one of the best farming games 2022, so if you find yourself stuck in a loop, just contact the support, they are super helpful and will fix you issue in no time!

How to get more energy on Family Island?

Energy points are tough to put your hands on in the game. One of the main goals on the Island is to upgrade your machines, the house, and the totems. You need resources for that and you need energy to supply the resources. So, inevitably, the more energy you have - the more resources you can get and you can go to the next levels. 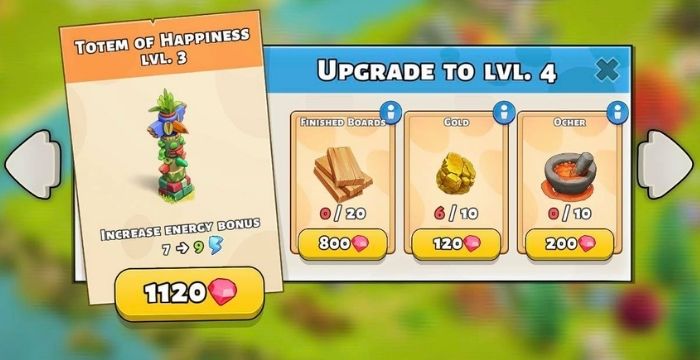 Any upgrade wins you points in order to get to the next level. The characters can also travel to nearby islands and get resources and prizes from them. Some of the destinations are quite exotic and there’s sometimes an animal to feed there (e.g. a cow or a sheep).

Now, feeding the family is crucial but at the very beginning of the game you can’t get much for that. On level 22 however, I could easily restore all the energy with a salad and a porridge.

Also, make sure you get as many orders from the Shaman done as you can - three reasons. You get some of your produce away and since you can’t just go and sell some of your things like in Hay Day, you depend on the Shaman and the Merchant to get rid of things you don’t want and make space for the valuable stuff in your inventory. Second, you get 25 energy points from the Shaman each time you get the order done. Third, you receive some valuable items, most of which you’ll use for upgrading machines and/or the house.

The other things which give you energy points on the Island are totems, the bathroom, the shower, and the Time Fountain. If you keep upgrading and repairing them, every few hours you’ll get extra energy points.

And last but not least - don’t get cheap with the Merchant. He is going to rob you of some valuable products but he rewards players with a golden key (each time you open a crate there are some saws, pickaxes, and shovels, and of course, some energy points).

How not to run out of resources on the Home Island?

This is an issue in the beginning of the game, to be honest. At some point my island started to look bad. There were just a few trees and rocks here and there and those were just the ones I didn’t have enough energy to demolish and use as resources.

The solution is to visit other islands on the game and use the resources from there. The game is kind of making you do that anyway, because no one has the resources on the Home Island to keep the machines going. Now, the other islands are of no big consequence so you can devour them as much as you like.

No need to worry about resources - there’s plenty of those on nearby islands. And if this is not enough - there will be some grass and trees growing on your Home Island as well.

Bruce is stuck and needs your help! 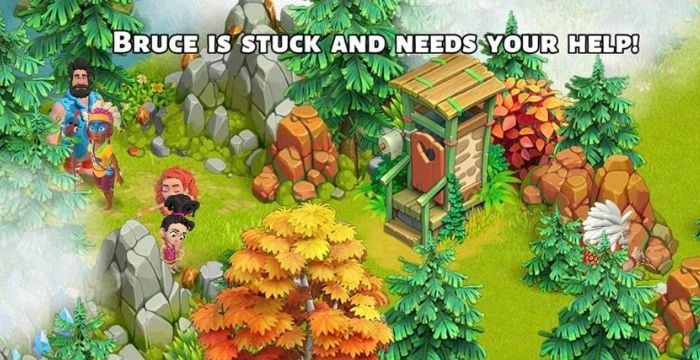 What to do when that message keeps appearing?

Sometimes it happens that a Family Island character is trapped at one part of the island and can’t get anything done for you on the Home Island. This might happen when you put a building on a path on the island and the character feels stuck. Just clear up the part and things would get back to normal. If you look at the image (above), on my Family Island the bathroom was inconveniently located…

So, I hope that now you have enough information to play the game at ease. It’s a cool game and I recommend it to anyone who is looking for their next favorite mobile game. Family Island might be just what you’re looking for.