Check out our Gaming category if you’re interested in the latest video gaming statistics 2022. Now, Paladins an action-packed adventure game that blends the best of first-person shooters and role-playing games to create a uniquely thrilling experience. Players can choose from a variety of heroic characters, each with their own special abilities, and battle their way through fearsome enemies to save the world from utter destruction. Paladins is free-to-play, so there's no need to spend a fortune on expensive gear - just download it now and get started on your adventure. How Many people play Paladins in 2022? Here we go:

One of the great features of the game, besides being free-to-play, is that the developers update frequently. Unlike games like Overwatch, which feel completely abandoned by their owners, Paladins feels alive and active as ever. The game is currenltly available on PC, PlayStation 4, Xbox One, and Nintendo Switch. So, what is the live Paladins player count 2022?

The online game Paladins is currently not on the Twitch 100 most popular games. In January 2022, people watched 1.16 million hours of Paladins gameplay on Twitch and the average number of Paladins concurrent viewers on the platform was 1,600.

3. As of February 2022, people have played more than 5 million hours of Paladins on Steam.

No. Between 19,000 and 21,000 people play Paladins concurrently across all devices in February 2022. Currently, the game is not very popular on Steam where it ranks #147. The Paladins popularity has dropped on Twitch as well where Paladins ranks #130.

The game is not very popular on Steam. In fact, it’s not even one of the Steam top 100 most popular games 2022. Now, they call Paladins “the free Overwatch” for a reason - many gamers (mostly kids) who don’t have the resources to purchase a high-end game like Overwatch, choose a free alternative and Paladins is definitely worth the shot. Let's see the latest Paladins Steam Charts 2022:

In 2021, Paladins used to rank #88 on the Steam Chart of top 100 games on Steam. And in 2022, the game has dropped to the #147 position. Consider the games that rank higher on Steam. Like Counter-Strike for example. Have you seen the latest CS:GO player count 2022? Make sure you do on your way out - it's astonishing!

In November 2016, more than 60,000 gamers played Paladins on Steam. Paladins was initially released on September 16, 2016 and a month laters 60 thousand people were already playing it. Since that moment of glory, the game's player base on Steam has dropped to an average of 7,000 concurrent players in February 2022.

People who play the game love the game and we can see why. It’s close to Overwatch and Team Fortress 2, but it’s still a separate game loved by many fans. 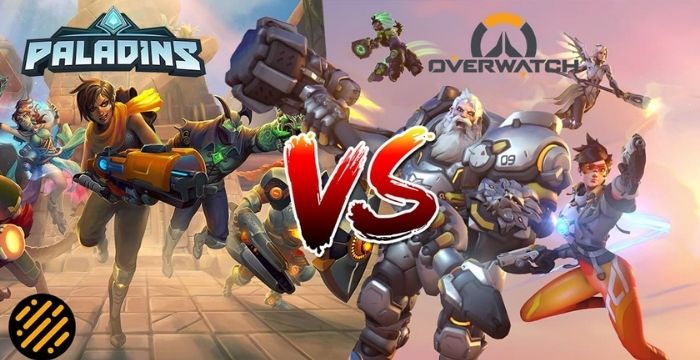 In the light of the recent decline in interest, Overwatch seems to have exited the attention of the public. The creators have turned their backs to the first installment and gamers are doing the same as we speak. In terms of player base, Overwatch is of course the more popular of the two shooter games. In 2022, between 650,000 and 850,000 people play Overwatch concurrently across all platforms.

Now, both Paladins and Overwatch have quality game modes. For Paladins those are Siege, Team Deathmatch, Ranked, and Onslaught. Overwatch offers seven of game mods - Assault, Control, Escort, Hybrid, Elimination, Deathmatch, and Capture the Flag. In terms of competitiveness, both games are loved by the public in 2022.

When it comes to design, both games look awesome but if we’re keeping it real we should say that Overwatch has a slight edge over paladins. In terms of heroes: how many heroes are there in Overwatch? Currently, there are 32 Overwatch heroes, a very diverse little group. How about Paladins? There are 47 playable characters on Paladins in 2022.

How many people play Paladins in 2022? According to the latest Paladins player count 2022, between 19,000 and 21,000 people play the game concurrently every day across all platforms. The popularity of Paladins on Steam and Twitch has dropped since last year. In 2022, Paladins ranks #147 on Steam and #130 on Twitch. In a battle of Paladins vs Overwatch we concluded that both shooter games have their merits but in terms of player base - Overwatch is the winner.

Looking for a job as a Game Tester? You can find it on Jooble.