How many people play Minecraft in 2022? Is Minecraft dead? Minecraft was developed and published by Mojang Studios back in 2011 and in 2022 the game is still our favorite 3D sandbox game of all time. What is the latest Minecraft player count 2022? Today, we’ll find out.

Minecraft is one of the most popular video games of all time, with millions of daily active players worldwide. It's no wonder why - the game is incredibly engaging and provides endless hours of entertainment for players of all ages. Here we go:

1. In July 2022, between 2.8 million and 4 million people played Minecraft concurrently across all devices.

2. As of August 2021, there are 141 million Minecraft monthly active players.

Minecraft is one of the top 10 Twitch games in 2022. The average number of concurrent Minecraft Twitch viewers in July 2022 is no less than 51,300 people. During the coronavirus lockdown of 2020, people watched between 50 and 80 million hours of Minecraft gameplay on the interactive live streaming service.

In February 2022, 122,000 people watched Minecraft gameplay on 5,245 channels on Twitch which is the current record of both viewers and channels on the platform since January 2017. And of course, watching Minecraft live events on Twitch is one of the things that brings most people to the platform.

5. More than 21% of all Minecraft players come from the US. 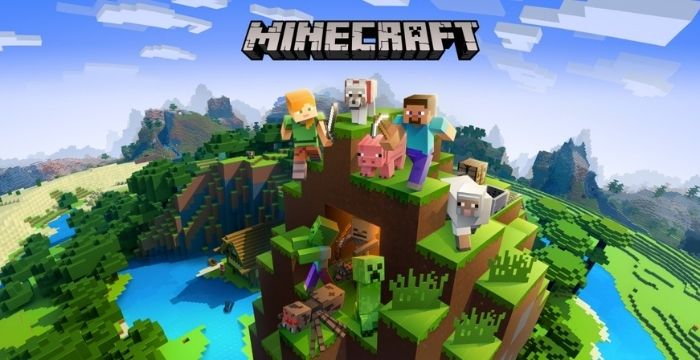 No. With more than 141 million active users in August 2021, there is no reason to believe that Minecraft is dying. In July 2022, between 2.8 million and 4 million people play Minecraft concurrently across all devices. More than 200 million Minecraft units were sold in 2020.

How many people play Minecraft?

7. The Minecraft app has been downloaded more than 10 million times on Google Play.

Minecraft is on the list of most-downloaded Google Play applications of all time. It’s also the most-downloaded paid gaming app on the Store - the app was downloaded on more than 10 million unique devices, and this is an app that currently costs $6.99 on Google Play. Of course, that’s nothing in comparison to mobile game titans like the free-to-play Candy Crush and Subway Surfers which both have around 1 billion downloads on Google Play Store.

8. One year after the Minecraft release in China, there were 100 million downloads already.

The learning-focused game is popular among kids all over the world, and China is no exception. China is one of the biggest game markets in the world and Minecraft took the Chinese gaming audience by storm.

The Minecraft world-building is famous among the younger audience. In fact, it’s so famous that almost 70% of boys between 6 and 8 years of age play Minecraft. The game offers a one of a kind world to explore your creativity and it’s kids-friendly. 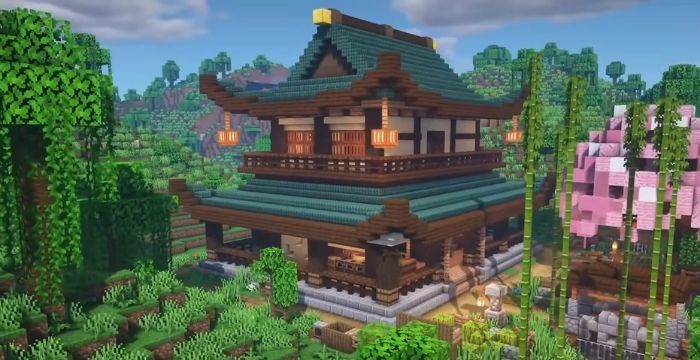 After more than a decade on the video game market, Minecraft’s revenue is still on the rise and Minecraft is still one of the best-selling video games of all time. The player base of the game continues to grow and as a result it made more money in 2020 than ever before. Have a look:

According to the latest Minecraft revenue statistics, the revenue of the game is ever increasing in 2021. Each year Minecraft has generated more money than the previous one. The still increasing popularity of the game is astonishing after 11 years on the market. We can safely say that the coronavirus pandemic is one of the main reasons for the increase of interest in many video games in 2020 and 2021 and Minecraft was no exception.

Minecraft mobile is huge in the global gaming community. Also, Minecraft is one of the most highly grossing mobile games of all time. How much exactly? In 2015, Minecraft generated $81.68 million in total profit. Then in 2019, the game hit the $100 million milestone with a total revenue of $111 million. In 2020, Minecraft mobile players spent the staggering $142 million on the game, and $160.69 million in 2021.

Minecraft is one of the most popular paid mobile apps on the market. The enormous popularity of the game with children has made it a rock star on the stage of video gaming. And the profits are rising every year. 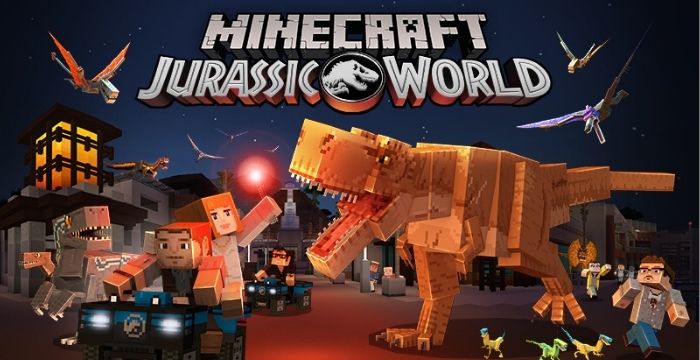 As one of the games which has attracted so much attention in the gaming community, we’d like to spare some time and share some curious Minecraft statistics and facts before we wrap things up. We all know that Minecraft is easy to play but the more you get to know the game - the more complicated it proves to be. Let’s have a look at some Minecraft statistics you might have missed over the years.

14. You can play Minecraft on a Hogwarts map.

The famous Minecraft buildings never disappoint. There are many Minecraft games available in 2022. As it turns out, the Harry Potter universe is not the only one you can dive in when playing Minecraft. People can enter Minas Tirith and enjoy the 3D splendor of Middle Earth at the ancient keep. And there’s also Minecraft Jurassic World. It’s no wonder the game is doing so well nowadays! Exploring Minecraft realms has never been more fun!

15. Videos about Minecraft have been watched more than 201 billion times on YouTube.

The game is extremely popular on Twitch and apparently, on YouTube as well. People love playing Minecraft, but apparently - they love watching other people play as well. Minecraft videos are popular on YouTube and maybe one of the reasons is that there are many mods to choose from and people want some insight on how to play better as well.

The current owner of Minecraft is Microsoft (through Xbox). The developers Mojang sold the game to Microsoft in 2014 for the incredible $2.5 billion. According to the latest Minecraft revenue statistics, the game made more than $400 million in 2020 so we can safely say it was a good investment.

17. Minecraft is a winner of three BAFTA awards.

The open-world sandbox game has won three BAFTA awards so far. There were two BAFTAs for Best Kid’s Vote - Game in 2014 and 2016. And one BAFTA for Best Family Game (for the console editions) in 2015.

In 2022, Minecraft is one of the best games like Terraria of all time. Both sandbox games are super immersive, beautifully designed, they feature awesome gameplay, and offer an unforgettable experience. The question is: do you want an open world game where you can explore? Or do you want something more focused with missions?

Minecraft is a 3D sandbox game about placing blocks and going on adventures. Explore randomly generated worlds and build amazing things from the simplest of homes to the grandest of castles. Play in creative mode with unlimited resources or mine deep into the world in survival mode, crafting weapons and armor to fend off the dangerous mobs.

In Minecraft, you can explore a randomly generated world full of caves, mountains, and forests, or build anything you can imagine out of blocks. With new updates released regularly and a thriving online community, there's always something new to experience in Minecraft.

Now, Minecraft is great but it can get a little repetitive. Terraria on the other hand is the perfect alternative to Minecraft. With more action-packed combat and endless possibilities for creativity, Terraria will keep you entertained for hours on end.

Terraria is a 2D sandbox adventure game that forges its own path. It's one of the most popular games in the world, and it's easy to see why. According to the latest Terraria player count, the game is still on the Steam top 20 most popular games. With its creative, engaging gameplay, Terraria allows you to explore vast worlds and build whatever you can imagine. Whether you're into slaying monsters or building impressive structures, Terraria has something for everyone.

If you're looking for an expansive and creative open-world game, then Minecraft is the perfect choice for you. With countless mods and updates, the possibilities are endless. But if you're looking for a more structured gaming experience with set goals, Terraria may be a better fit for you.

Whether you're a hardcore gamer or just looking for a little bit of fun, Terraria and Minecraft are both perfect for you. With challenging gameplay and hours of enjoyment, those sandbox games are fun for gamers of all ages.

Minecraft is a great game, but sometimes you just want something different. If you’ve been a Minecraft fan for years and you wish for some similar games like Minecraft in 2022, then this list is for you. 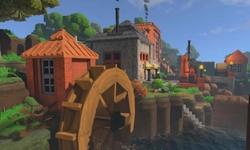 Enter the beautiful vibrant magical world of Eco - an online game where the player creates a civilization, encounters wildlife of any form, and creates buildings out of resources of the rich ecosystem around. The game is definitely worth exploring if you’ve already played Minecraft and/or Terraria - it’s available on PC (Steam) and can be used as an educational resource to help students understand the impact of human activity on the environment. A must-play! 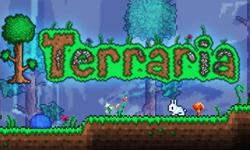 According to the latest Terraria player count 2022, the 2D game is still in the Steam top 20 most played games this year. It’s an extremely addictive game and people spend hundreds of thousands of hours (yes, thousands!) building intricate structures, fighting monsters of all kinds, and planting trees. The game is a must-play for students of architecture because it provides basically infinite possibilities in terms of materials, biomes, and instruments to use while building. The day and night cycle of the game brings a certain atmosphere to the Terraria gameplay (same as Minecraft) and once you get started you can basically do anything you want in a world of your own. 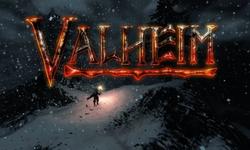 According to the latest Valheim player count, between 30,000 and 55,000 people play the Viking game concurrently on Steam in 2022. It’s a 3D sandbox game inspired by Norse mythology that features lots of brutal fights, grim atmosphere, and beautiful design. Players enjoy the rewarding building experience Valheim provides as well as exploring a rich world around. When the game came out in early 2021, more than 500,000 people played Valheim concurrently on Steam and broke some all-time records. 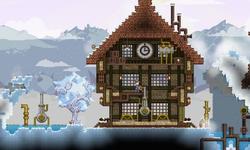 The action-adventure video game Starbound is definitely one of the best games like Minecraft in 2022. It was developed and published by Checklefish in 2016 and offers a 2D sandbox gameplay similar to the one we see in Terraria. Players enjoy the ability to create and transform the Starbound environment any way they like as well as farming and selling crops for profit. A must-play!

Today we recommended some of the best games like Minecraft to try if you’re looking for something new in the same video game genre.