What is the latest Sea of Thieves player count 2022? Is Sea of Thieves dead in 2022? The game features bloody sea battles, living skeletons, vengeful pirates, storms at sea, renegade captains, gold and glory, shattered ships, firing cannons, giant sharks and a kraken, and barrels of rum. Let’s face it - we all love some quality pirate games. How many people play Sea of Thieves in 2022 and which are the best games like Sea of Thieves? Today, we'll find out.

Yo ho ho everyone! You can find all sorts of video game stats on our Gaming category and check out the latest player count of many of the most popular video games in 2022. Now, is Sea of Thieves losing poularity in 2022 and how many people are still playing the pirate game four years after the Sea of Thieves release in 2018? Let's find out:

Nowadays, Sea of Thieves is definitely one of the best pirate games on the video game market. Gather a small party of friends and start the game in a multiplayer mode. The action-adventure game is hard to let go once you start your pirate career and thousands of people all over the world are enjoying the newly found pirate life. How popular is Sea of Thieves on Steam nowadays? Let's get started:

One of the most successful pirate games on the video game market ranks on the Steam top 100 and has stayed there for the last year. In order to get to the Steam Charts, a game needs to have a vast potential. According to the latest Titanfall 2 player count 2022 for example, the game is nowhere near the top 100 on Steam. Unlike Sea of Thieves, the fanbase of Titanfall seems to be disappointed with how things worked out. On the other hand, the Valheim player count entered the history of the platform with more than 5 million players in the first month after the early access release. Score!

4. The all-time peak of concurrent Sea of Thieves players on Steam is 66,000.

The game made its Steam debut in June 2020, and during the first month after the release it reached the peak of concurrent players so far. In June 2020, more than 66,000 people played the game concurrently on Steam. As of January 2022, the 24-hour peak Steam player count of the game is 16,286 players.

A Q1 2021, the game used to rank $47 on Twitch. The average popularity of Sea of Thieves on the video game live-streaming platform Twitch still keeps the game in the Twitch top 100 most watched games in January 2022. Let’s compare that to other game giants. According to the latest Modern Warfare player count, the legendary Call of Duty: Modern Warfare ranks #70 on Twitch, Overwatch is #30, and PUBG - #25. The fact that Sea of Thieves ranks in the top 100 is admirable.

6. In December 2021, people watched 4.55 million hours of Sea of Thieves gameplay on Twitch.

Let’s be honest here: the game is awesome to watch as well as play. In December 2021, there was an average of 6,100 concurrent Sea of Thieves viewers on Twitch and people watch around 800,000 hours of Sea of Thieves gameplay on the platform every week.

7. In January 2022, most Sea of Thieves players came from the US and Germany. 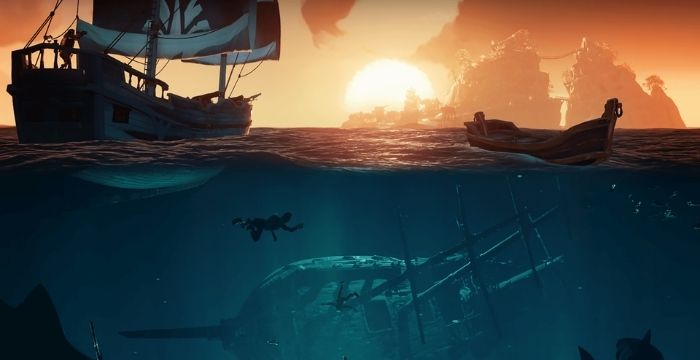 We can safely say that Sea of Thieves is a beautifully designed game which feels very immersive and the atmosphere is just so Caribbean. 🌴🌊☀️The graphics are just cartoony enough to make us appreciate the fictional world of pirates as opposed to the very realistic representation of let’s say WWII Battlefield series.

The game was developed by Rare and published by Microsoft Studios in 2018. How many people played Sea of Thieves so far and what are some interesting facts about the game you might have missed? Here we go:

8. In July 2020, Sea of Thieves surpassed the 15 million players milestone.

Sea of Thieves has become one of the most successful games for Xbox. In January 2018, the game surpassed the 10 million players milestone, as it was announced by Microsoft Studios. The game was already played by people from more than 80 countries around the world and in just six months after the 10 million milestone the Sea of Thieves player count skyrocketed to 15 million.

9. The rarest object to obtain in Sea of Thieves are the Banana Sales.

The infamous Banana Sails are the rarest object one can obtain in the game, for some reason. It’s a reward from the Banana Quest which unfortunately is no longer available and players hope it will come around again, so they could compete for the rare item. Among the other rare objects in Sea of Thieves are things like Ebon Flintlock — a fancy pistol, Box of Wondrous Secrets - look for it at Devil’s Roar, it’s still available, and the Triumphant Sea Dog Figurehead - an item which can be positioned at the bow of the ship for splendor.

10. There are 6 types of quests in Sea of Thieves.

The Sea of Thieves quests are like tasks the crew needs to complete in order to receive a reward. You can obtain a quest from various sources - Tattered Parchment, Message in a Bottle, a Voyage, Skeleton’s Orders, Mysterious Journal, Emissary Quests, Tall Tales. The 6 types of quests are: Skeleton Bounties, Riddle Maps, X Marks the Spot Maps, Merchant Contracts, Tale Books, and Cargo Runs.

The factions in Sea of Thieves are called Trading Companies. Each of them is oriented to a specific in-game content — Quests, Voyages, themed Cosmetics, Treasure, and of course Adventure. The factions offer the crew characters a way to trade and get promoted, or a quest for gold and glory. The Trading Companies are: Sea Dogs, Athena’s Fortune, Order of Souls, Gold Hoarders, The Hunter’s Call, Bilge Rats, Reaper’s Bones, and the Merchant Alliance.

12. The maximum crew size in Sea of Thieves is 4 players.

The party size of Sea of Thieves is four crew members because the biggest ship in the game is designed for a maximum of four people. The developer’s arguments are that a larger crowd would not work together as well as a group of four and the whole point of the multiplayer mode is to be a well-oiled machine that functions as one.

And last but not least, a Sea of Thieves fun fact:

13. Pirates can use their vomit to help them during Sea of Thieves battles.

Gross but true. Characters can get drunk in the game and sometimes a fight starts at the same time. (What are the odds, ha?) If you manage to vomit in the face of your enemies, well, this can blur their vision for a while and help you escape or kill them. 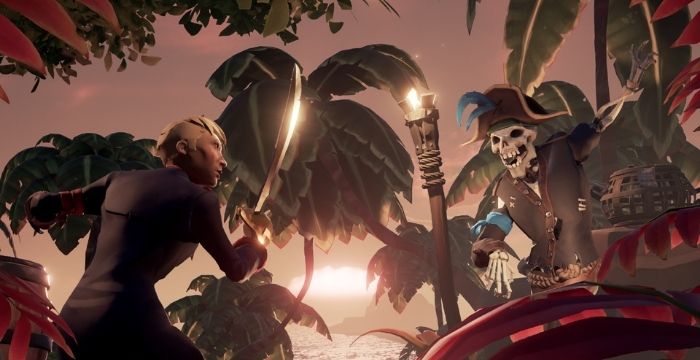 The first-person perspective action-adventure game Sea of Thieves has become popular in recent years. The gameplay is addictive, the design of the game - awesome, and those bloodthirsty pirates and buried treasures just keep us coming back for more. If you crave more exciting sea voyages and you’d like to discover more games like Sea of Thieves — here’s our list of four recommendations in 2022. Have a look:

This is the obvious first choice for a game like Sea of Thieves. The 18+ tactical action-adventure video game was developed and published by Ubisoft. It’s available in a single-player and multiplayer mode on PC (Windows), PlayStation 4, and Xbox One. The game is expected to be a maritime sensation with lots of treasure hunts and battleship fights to sparkle the interest of the audience.

A classic pirate game set in a dark and gloomy reality, Blackwake was initially released in 2017. The FPS naval multiplayer game is only available on PC (Windows and macOS) and is not very popular among the video gaming community. The all-time peak of Battlewake player count on Steam is a little more than 6,000 people and that was in immediately after the game was released. In a battle of Blackwake vs Sea of Thieves, the latter has the distinct advantage in player count. However, the game is definitely worth checking out if you’re interested in pirate games!

Another excellent choice for a pirate game in 2022. The graphics of Naval Action feel more realistic and beautifully detailed than Sea of Thieves but lack the cartoonish effects and the colors of the deep violet Caribbean sunset. The game has been available on Steam since 2016, and the Naval Action player count hasn’t gone over 5,000 concurrent players yet. However, if you’re craving some authentic sea battle with cannons and strategic plot twists, Naval Action is the game for you.

Many players compare the pirate game with the new sandbox Viking game Valheim. It became a sensation on Steam literally as soon as it hit the platform. According to the latest Valheim player count, the game was played by more than 5 million people during the first month after the early access release. The game combines the allure of an action-adventure game with combat and bloodthirsty beasts, with the charms of a sandbox game like Minecraft or Terraria. It’s a must-play in 2022!

Today we recommended the best games like Sea of Thieves for you in 2022 in case you wish for a new game in the same video game genre. Trying one or more of the games on our list will definitely bring back the excitement of the Sea of Thieves gameplay.