What is the latest TF2 player count 2022? Team Fortress 2 is one of the best first-shooter video games of all time as well as one of the most popular games of the renowned video game publisher — Valve Corporation. How many people play TF2 in 2022? Is TF2 dead? Today, we'll find out.

Check out our Gaming category if you’re interested in the latest video gaming statistics 2022. Now, Team Fortress 2 is a brilliantly fun, action-packed multiplayer game that pits teams of players against each other in an all-out battle for supremacy. With its cartoony graphics and easy-to-learn controls, it's perfect for gamers of all ages and experience levels. Today we'll take a good look at the Team Fortress 2 player count 2022 and compare it to some of the best video games out there. How about TF2 vs Overwatch? Let’s get started:

The game was released back in October 2007 and is still in the Steam top 10 in 2022. How many people play Team Fortress 2 in 2022? How popular is Team Fortress 2 on Twitch and on which platform do people play the game the most? We’ll answer all those questions and more. Here we go:

The source website uses an algorithm to track the active player count of the most popular video games 2022. In order to determine the exact TF2 player base, our team monitored the activity of TF2 players and came up with those numbers. According to the TF2 tracker, in February 2022, the TF2 player count is between 130,000 and 150,000 concurrent players.

According to the latest TF2 Steamcharts, Team Fortress 2 is one of the top Steam games by live player count. It happens that games like Valheim or Lost Ark make their way on the Steam top 10 for some time, but Team Fortress 2 always comes back on the top 10.

According to the source, the average total playtime per TF2 player is estimated around 361 hours. The popularity of the game increased during the coronavirus pandemic of 2020 when many people started playing more games because of the global lockdown.

Fewer and fewer people are creating TF2 content to stream on Twitch and that’s one of the factors which tell us that the interest in the game is slowly dropping. In 2021, TF2 used to rank #191 and although this is not very flattering either, it's way better than the current ranking. Regardless of the game’s success on Steam, TF2 is not very popular on the video game live-streaming platform Twitch.

6. In February 2022, most Team Fortress 2 players come from the US and Russia. 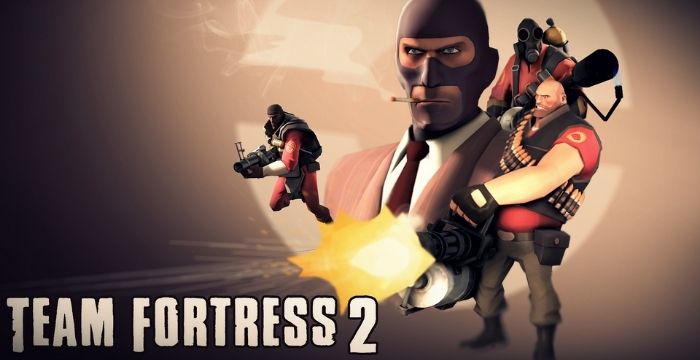 How many people play TF2?

Between 130,000 and 150,000 people play TF2 concurrenly across all devices in February 2022. TF2 is currently available on PC (Windows, MacOS, and Linux), PlayStation 3 and Xbox 360. Even though you can’t play Team Fortress 2 on the next gen consoles or on Nintendo Switch, the fanbase of the game is still loyal in 2022. Let’s see:

According to the latest TF2 Steamcharts, the TF2 player base on Steam has played a total of 50 million hours of Team Fortress 2 on Steam. This sounds pretty astonishing but it's less than half of the total hours played of games like PUBG or Apex Legends. The TF2 player count 2022 proves that Team Fortress 2 is still a favorite among fans of multiplayer games but its player base is definitely way less than the most popular shooter games.

8. In 2020, Team Fortress 2 was the 8th most played game on Steam based on hourly average number of players.

On the top of the list is the all-time favorite of the video gaming community — Counter-Strike: Global Offensive. According to the latest CS:GO player count, around 1 million people are playing the game concurrently on Steam in 2021. Now, TF2 is not one of those games to attract millions of players concurrently, but it’s still in the Steam top 10 games in 2021.

The game is too old to have been nominated for a Steam Award 2020, but it was honored with not one but two Steam Award nominations in the history of the Steam Awards. Unfortunately, the game lost both times. In 2016, TF2 was nominated in the category ‘The Test of Time’ and lost to The Elder Scrolls: Skyrim. And in 2017, the nomination was for ‘The Labor of Love’ Award — the winner this time was Warframe.

Now, let’s have a look at the developers of Team Fortress 2 for a moment. How many other productions of the company do you know of? Let’s see:

The Valve Corporation was founded back in 1996 and it’s known as a video game developer and publisher, and also for hardware and software development. Their first video game production was the legendary Half-Life — one of the first shooter games on the video game market ever was released back in 1998.

Here are the video game products of the Valve Corporation and the initial release date:

Two of the most popular PC games on Steam in 2022, are on that list we just saw. According to the latest Dota 2 player count, more than 600,000 people play Dota 2 concurrently on Steam in 2022 and it has ranked #2 on Steam for a long time. And the king of the PC games in 2022 is still the one and only CS:GO — with 1 million concurrent players on Steam it would be difficult to dethrone.

In terms of revenue as a video game publisher, the competition in the video game industry is fierce. The Valve Corporation generated $3-4 billion in revenue each year. Those guys are responsible for the creation of Steam — our favorite PC gaming platform. The video game digital distribution service was launched in 2003 and (thanks to the COVID-19 lockdown in 2020), there were 20 million online concurrent users on Steam in 2020. 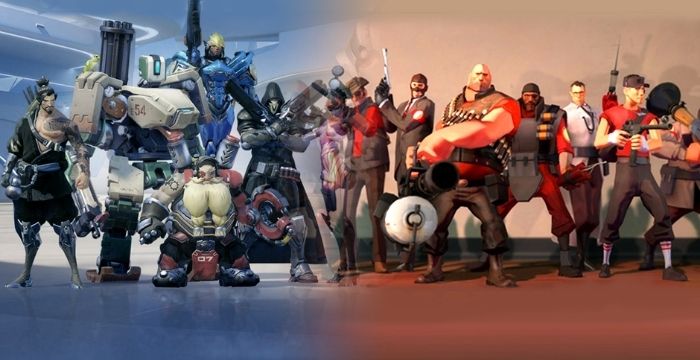 Some people call Team Fortress the “granddaddy” of first-person shooter games. When Overwatch was released back in 2016, millions of people played the game which left many existing games with fewer player count. However, Overwatch has lost most of its fan base in recent years due to the lack of consistent content releases which led to the drop of the Overwatch player count. On the other hand, Team Fortress 2 continues to be on the Steam top 10 games in 2022.

Now, many gamers compare Overwatch with Team Fortress 2, and we’d like to way in. We’ve already compared famous games like Paladins vs Overwatch, GTA5 vs Watch Dogs, Battlefield 5 vs Call of Duty, and Destiny 2 vs Warframe. Let’s have a look at the pros and cons of our next contestants — TF2 vs Overwatch.

We start with the obvious — both games are really different in terms of visual effects. Overwatch feels more futuristic in a way, and Team Fortress 2 is more cartoony and old-fashioned. Overwatch is more artistic and inspired in terms of design, decor, and characters. In broad terms, the two games have different vibes — modern vs classic. Of course, if we compare the graphics of Overwatch to games like Battlefield 5 or Titanfall 2, Overwatch definitely seems way less sophisticated.

And last but not least, in terms of number of hackers, those two games can’t complain of lack of aim bots and other mischievous hacks. There are hacker-free servers in the TF2 community for those of us who disapprove of easy wins. And when it comes to cheating in Overwatch — in February 2021, there was a massive cheating wave ban in South Korea. The community is trying their best to get rid of cheating in video games, but it’s a slow process.

What do you think about it? Which is your favorite game out of the two?

How many people play TF2 in 2022? According to the latest TF2 player count 2022, between 130,000 and 150,000 people play Team Fortress 2 concurrently every day across all devices. The interest in the game has been higher on the video streaming platform Twitch where TF2 ranks #325 in February 2022. We compared TF2 vs Overwatch in terms of gameplay, characters, weapons, and overall gaming experience. Which one is your favorite in 2022?