What is the Battlefield 5 player count in 2022? Battlefield started as a war recreation project in 2002 and almost twenty years later, it’s one of the most influential first-person shooter video games of all time. We’re here today to look closely at how things are going for the latest installment of the Battlefield series. How many people play Battlefield 5 in 2021? Today we’ll find out!

According to the latest game demographics statistics, 90% of people who play first-person shooter games are male. Is this the case with Battlefield 5? Read on and find out today! The Battlefield series let 21st-century video gamers immerse in the world of WWII and try to survive. BF5 has been on the video game market since 2018 and after almost three years the BF5 player count has changed a bit. You will find the latest Battlefield 5 statistics on in our Gaming category.

Battlefield 5 is one of the popular first-person shooter video games in 2021. It’s never been as popular as Apex Legends or Counter-Strike of course, but it’s still a favorite among shooter game fans. How much exactly? Let’s see:

Curiously enough, the game has kept the same Steam rank since 2021. Now, as you may already know, CS:GO has been at the forefront of that chart for years now. According to the latest CS:GO player count, an average of 580,000 people play CS:GO concurrently on PC in July 2022. In comparison, BF5 is still in the Steam top 100 most popular games but hasn’t reached the top 10.

The Twitch ranking of Battlefield 5 has dropped more than 100 positions down since last year. According to the latest Twitch statistics and charts, Battlefield 5 doesn’t rank in the Twitch top 100 games in 2021. The number of live viewers has gone below 1,000 and there is currently an average of 219 concurrent viewers on the platform. 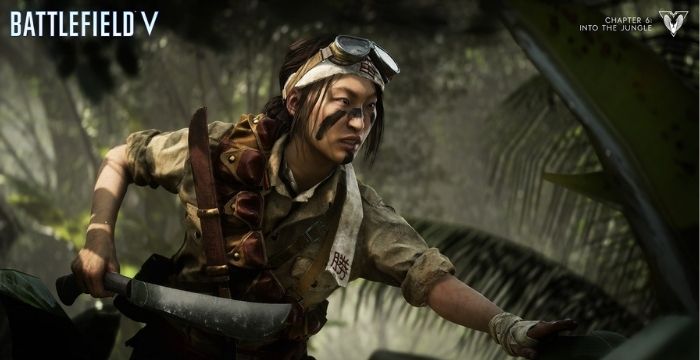 How many people play Battlefield 5?

The Battlefield 5 player community is about 25,000 monthly active players in July 2022. With an average of around 8,000 concurrent players on Steam in July 2022, the FPS is definitely not very popular five years after the release. Currently, the game still ranks in the Steam top 100.

BF5 is not extremely popular on Steam but there is some loyal fan base out there that still keeps the numbers up. In October 2021, the interest in the game suddenly doubled and the number of BF5 concurrent players on Steam went up.

According to the Battlefield 5 Steam Charts, Battlefield 5 PC is one of the top 100 most popular games on Steam! It’s true that BF can’t compete with games like Apex in popularity — according to the latest Apex Legends player count, the game ranks #4 on Steam, and around 80,000 play the game on Steam (on average). Still, BF5 enjoys moderate popularity with its 18,700 average number of Steam players per month in 2022.

According to EA, that was 1 million fewer copies than the company expected. The game faced some strong competition like Fortnite, Call of Duty: Black Ops, and Red Dead Redemption 2 and as a result, didn’t meet the earnings target.

The Steam Awards 2020 happened to be very dramatic. There were so many fan favorites among the competitors that we held our breath for almost two months before the winners were revealed. In 2020, Battlefield 5 was nominated for a Steam Award in the category ‘Outstanding Visual Style’. The other competitors in this category were none other than Ori and the Will of the Wisps, Black Mesa, Marvel’s Avengers, and There Is No Game: Jam Edition 2015. Unfortunately, Battlefield 5 didn’t win — the award went to Ori and the Will of the Wisps, and in all fairness, the game won fair and square. It’s easily one of the most beautifully designed games ever created.

As incredible as that sounds, the game has had 16 installments so far. Their system of numbering the game is weird, to say the least. The one before BF5 was Battlefield 1…  (There’s some similarity with the naming of the Xbox consoles if you think about it.) We’ll cover the most important Battlefield series in a minute.

Battlefield vs Call of Duty

We already compared Destiny 2 vs Warframe, Paladins vs Overwatch, and GTA 5 vs Watch Dogs. It’s time for another clash of titans: Battlefield vs Call of Duty. Let’s have a look at some of the most important details, pros and cons about both games so you have the full picture. We’ll focus on Battlefield 5 & Call of Duty: Modern Warfare — the latest installments of both franchises. Many gamers compare the long-time rivals, and we decided to have a closer look. Here we go:

First things first: in terms of video game genres, both games are first-person shooter games so no surprises there. Based on the number of players, there are some major differences between those two though. Call of Duty: Modern Warfare came out on August 23, 2019 — by November 2020, the game was already played by more than 23 million people on PS4. (See stat #7 for Battlefield 5.) In other words, the Modern Warfare player count is significantly higher than the fan base of Battlefield 5.

In terms of setting, both games are very different. Battlefield 5 takes place during World War II — the developers have done a fantastic job researching costumes. The Call of Duty outfits on the other hand are much more diverse based on the fact that the game is set in modern days but not so meticulously designed as clothes in Battlefield 5. The Modern Warfare environment looks awesome in every way — every detail feels awesome! There is no huge difference in terms of weapons in the games — actually, most of them look and feel quite similar.

And of course, when it comes to gameplay, both games sport some pretty awesome features. In Battlefield 5, players can fight in a wide range of World War II locations which are designed super convincingly and the game feels super immersive. Fans of both games compare them by the visual effects and more often than not, Battlefield 5 wins more points in the visual department (remember that Steam Awards nomination for visual effects?).

Battlefield 6 (a.k.a. Battlefield 2042) was one of the most anticipated video games of 2021. The newest Battlefield installment was developed by DICE and released by electronic Arts on November 21, 2021.

How many people play Battlefield 2042? During the first month after the launch, Battlefield 2042 was played by more than 100,000 people on Steam. In 2022, the average Battlefield 2042 player count on the platform is 6,000 concurrent players.  The last installment of the Battlefield series is available on the next-gen consoles — PlayStation 5 and Xbox Series X, as well as on PC (Windows).

Let’s take a short trip down memory lane. The history of the Battlefield video game series takes us back 20 years — the first Battlefield installment was released back in 2002 and was called Battlefield 1942. The original Battlefield was a hit from the start and there are still several servers that support the game.

The evolution of the Battlefield franchise is spectacular, to say the least. The development of the game definitely influenced the video game industry. Let’s check out the Battlefield timeline and see the most important Battlefield release (how many of those did you play?):

Now that you’ve seen the most important Battlefield installments since the initial release of the first Battlefield game, let’s have a look at what’s going on with the latest launch: 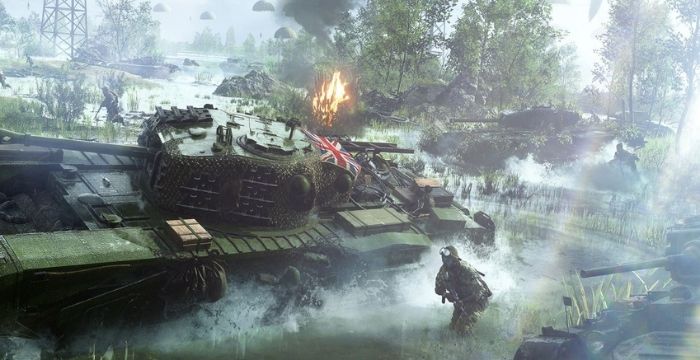 Battle royale games are super trendy in 2022 and their player base is usually larger than that on many other games nowadays. The online multiplayer video game genre became wildly popular with the release of PUBG and Fortnite in 2017 and is still one of the favorite video game genres today. In 2022, the PUBG player count is more than 400,000 people on Steam.

Battlefield is a World War II shooter game — each of the numerous installments and chapters offers different mods, weapons, and maps. However, Battlefield 5 Firestorm is the only one that sports a battle royale mode so far and it was long overdue. Fans of battle royale games went crazy when Counter-Strike came up with CS:GO Danger Zone and the CS:GO player count went through the roof. There is a reason why game developers invest in battle royale modes and Battlefield didn’t disappoint in that department.

The Battlefield 5 Firestorm came out as a multiplayer mode in the BF5 chapter Trial By Fire. It was released on March 25, 2019 and was only available for Battlefield 5 owners. The only map that’s available for the battle royale on BF5 is called Halvoy — the 64 players airdrop and compete against each other in the hope of becoming the last man standing. The map features multiple terrains, weapon vaults, and sporadically distributed vehicles. The battle royale mode received high scores among the critiques and is still a favorite among fans.

Are you looking for an immersive gaming experience with a new FPS game? Here’s our list of the best games like Battlefield 5 in 2022:

The CoD franchise is a legend in the video game industry and is definitely one of the best games in the FPS genre. Call of Duty: Modern Warfare is one of the best games like Battlefield 5. According to the latest Modern Warfare player count, CoD is not very popular on PC but in Q3 2020 there were 111 million CoD active users across all platforms. The game is spectacular in every aspect - weapons, characters, design, maps. A must-play for everyone who’s looking for FPS games.

The grandfather of Overwatch is still going strong. According to the latest Team Fortress 2 player count, the game ranks #8 on Steam in 2022. TF2 might be an old-but-gold game but it’s still one of the most beloved first-person shooter games in 2022.

In 2022, this first-person shooter ranks #5 on Twitch with an average of 195,000 average concurrent viewers in Q2. The game was developed and published by Battlestate Games in 2017 and it’s one of the most popular shooter games in 2022. It’s set in the city of Tarkov, Northwestern Russia (2015-2026). The game offers an immersive military experience, great fighting locations, and a virtual flea market to trade firearms, armor, and equipment in the game.

The multiplayer-only survival game is a must if you’re a fan of the Battlefield franchise. According to the latest Rust player count, more than 100,000 people play the game concurrently across all devices every day in 2022. Rust is fun, exciting, and very popular on Steam and Twitch. A must-play!

Is Battlefield 5 dead in 2022? How many people play Battlefield 5 in 2021? Although there is a certain drop in interest in the game, there are around 25,000 loyal Battlefield 5 players in 2022. The Battlefield 5 player count is not impressive nowadays. I can't compete with games like CS:GO or Apex Legends in that department. In 2022, BF5 ranks #78 on Steam and #393 on Twitch.

In the years after the release of the first Battlefield installment back in 2002, Battlefield evolved and became one of the popular first-person shooter video games. The game is often compared to Call of Duty because of its similar gameplay and setting. In terms of number of players, Call of Duty is definitely the more popular one, but Battlefield players claim that the game is more visually appealing.